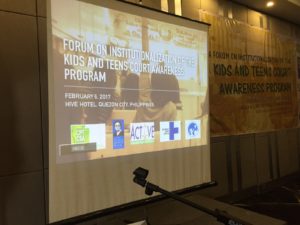 This year’s Round Table Discussion (RTD) was held last February 6, 2017, at the Hive Hotel and Convention Place in Quezon City. The event marks the second year of continued partnership between the consortium (JCMPF, CPTCSA, and ACTVE) and the Quezon City Family Courts for the implementation of the KTCAP in Quezon City.

The RTD was also a call to instituti

The activity commenced at 1 o’clock in the afternoon with an Invocation and singing of the National Anthem led by the moderators Atty. Cristina Sevilla of ACTVE and Regina Rabanillo of CPTCSA.

CWC’s Executive Director, Patricia Luna, welcomed the participants with a message of hope for children and an expression of support to JCMP 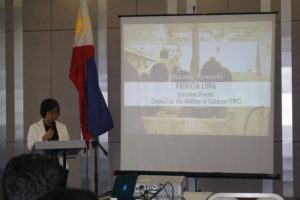 F, ACTVE, and CPTCSA’s efforts in promoting the program that protects the right of children especially the children victims of abuse and exploitation.

After the welcome remarks, Ms. Rabanillo acknowledged the partners and guests that were present. Atty. Sevilla then took over and briefly narrated the KTCAP journey along with the challenges and successes attached to it. JCMPF Executive Director, Ms. Emily Palma, continued with the program’s recent accomplishments which highlighted the increased number of children reached in 2016 and the overwhelming support of the Quezon City Family Court judges as well as the partner agencies to the program.

As a testimony and a response to the program’s important contribution to the child’s battle for justice, Jennylyn Ambat of CRIBS, Lourdes Gardoce of LGU Valenzuela, former QCRTC Executive Judge Fernando Sagun, Jr., and the current QCRTC Executive Judge Cecilyn Burgos-Villavert, shared their experience and valuable insights about the program. All of them were unanimous in saying th 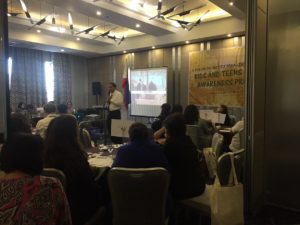 at: KTCAP is a program that could help empower children who have been victims of abuse and exploitation, who are seeking justice in the legal system. When children understand their role, and have recognized their rights, they will have confidence and will be able to better cope with the whole process of reporting and filing the case, in going to and in testifying in court. KTCAP must be supported by all concerned and each one must do his/her part according to one’s capacity and position.

After this, CPTCSA Director, Ms. Zenaida Rosales, discussed the next steps for the program emphasizing the need to replicate the program in other cities. With the number of child abuse cases reported and documented by DSWD, the number of children reached by the program for the past 20 years was too low, not even reaching 1%. This is an alarming concern that stakeholders must consider. Mainstreaming and institutionalizing the program is the key. Atty. Sevilla supported these remarks noting that participation and commitment from LGUs and NGOs are crucial in this undertaking.

Participants were given space to raise their issues and concerns through an Open Forum. Judge Mary Angelene Sale of QCRTC Branch 106 was the first to raise a hand. She noted that KTCAP will supplement the competency enhancement trainings provided to family courts, prosecutors and judges for a more holistic perspective in assisting the child victims. Among others who participated in the discussion were Atty. Emmanuel Diones of PAO, Juvy of DSWD, Atty. Meghan Musni of Supreme Court OCA, Judge Sagun, Judge Burgos-Villavert, Judge Chua Cheng of Marikina RTC Branch 168, and the two delegates from India and Nepal 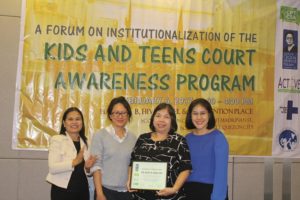 Before ending the day’s event, Certificates of Appreciation were awarded to the speakers and the 8 QC Family Court program partners.

The event ended at exactly 4 o’clock in the afternoon with a heavy meryenda (snacks) and socialization.