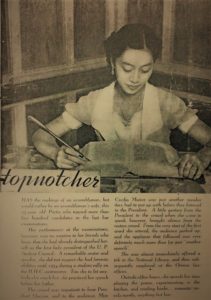 Born in Bauan, Batangas on November 22, 1913, Cecilia Arreglado Muñoz grew up to become one of the great leaders in Philippine contemporary history.  Celing’s father, Pedro P. Muñoz, was a lawyer and a former Congressman of the 2nd District of Batangas to the First Congress of the Philippine Independent Republic.  Her mother, Emilia Arreglado, was an ordinary housewife from whom Celing inherited her piety and simplicity in nature.

Celing studied at St. Scholastica’s College in Manila and became the valedictorian of high school Class 1931.  She then took up law at the University of the Philippines College of Law. As a student, she distinguished herself not only in academic honors but also in extra-curricular activities.  She was the first woman to be elected as president of the Student Council of the College of Law (1936-37), President of the Portia Club, first place in the first oratorical contest held by the U.P. Debating Club (1934), and recipient of the Dr. Mendoza-Guanzon’s medal for excellence in oratory and Justice Abad Santos’ medal for excellence in debating.  In 1937, Celing topped the Bar Examination with a score of 92.6%. 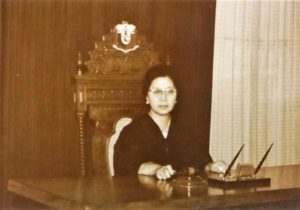 of the Supreme Court where she served from 1973 to 1978 having retired at the compulsory age of 65.  Confronted with cases which involved Presidential powers during the Marcos martial law regime, Justice Palma voiced her strong dissent to violations of the Constitution and the Rule of Law, and desecration of the individual’s basic rights to freedom, justice and due process.  She championed an independent judiciary, free from the clutches of political power.  Justice Palma’s unflinching courage earned her the people’s admiration and gratitude, and she was given the accolade of being the only “man in the Supreme Court” during her time.

In May of 1984, Justice Palma entered the political arena and representing the political opposition party, she was elected to the Batasan Pambansa (House of Representatives) where she served until the legislature was dissolved in March 1986 by the revolutionary government of President Corazon Aquino.  During her legislative stint, she was Chairman of the Committee of the Opposition which drafted and filed Impeachment Proceedings against then President Ferdinand Marcos.

Justice Palma headed the Unification of the Political Parties in preparation for the Snap Presidential Elections of 1986, and with Mrs. Corazon C. Aquino, widow of Senator Benigno Aquino, Jr., and the freedom-loving Filipino people, succeeded in dismantling a dictatorship and returning democracy and the civil liberties of the Filipino people. 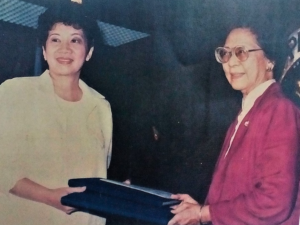 An outstanding scholar, jurist, civic leader, and human rights advocate, Cecilia Muñoz Palma was appointed by President Corazon C. Aquino as Member of the Constitutional Commission of 1986 which drafted a New Constitution for the Philippines after the overthrow of the Marcos dictatorship in February 1986.  On June 2, 1986, the Constitutional Commission elected her President of that August body and under her leadership, the New Constitution was finished on October 15, 1986 and ratified by the Filipino people on February 2, 1987.  She was appointed by President Aquino as member of the Council of State, the highest advisory body to the President.

In recognition of her non-political leadership, in 1992, President Fidel V. Ramos appointed Justice Palma as a Member of the Council of Advisers of the Moral Recovery Program where she was elected as Vice-Chairman of said Council.

In 1998, at the age of 85, Justice Palma was appointed Chairman and General Manager of the Philippine Charity Sweepstakes Office by President Joseph Ejercito Estrada.  There she served with generosity and prudence in ensuring that marginalized people in the country actually benefit from the charitable institution.

Celing was married to Rodolfo C. Palma, a native of Tagbilaran, Bohol. 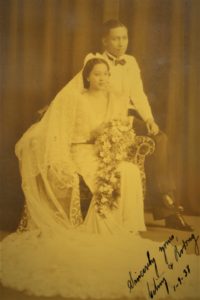 Justice Cecilia Muñoz Palma attributes all her successes and her entire life as gifts from Almighty God from whom she invokes divine guidance in her everyday work.

(Adopted from “Cecilia Munoz Palma: Woman Exemplar for all Seasons” by Atty. Lulu Tesoro Castaneda from “Faith, Truth, Justice, Freedom: A Souvenir of Recollections,” a Souvenir Program on the 80th Birthday Celebration of Justice Palma, 1993.)