On Saturday, February 18, 2017, the Justice Cecilia Muñoz Palma Museum formally opened its door to the public. On that rainy afternoon, over a-hundred people gathered at the grounds of the Quezon City Department of Justice Building to witness the ceremonial opening of the museum.

The program started at exactly 3 o’clock in the afternoon with an opening statement from the Board of Trustees Member and emcee, Grace Palma-Tiongco.

After the opening, Corazon Alma De Leon, Board of Trustees Treasurer, led the Invocation. The singing of the National Anthem immediately followed. 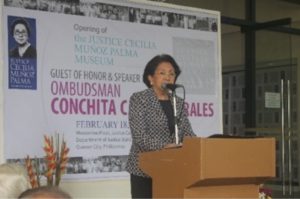 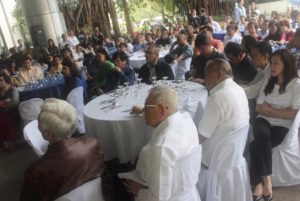 People behind the Museum. The occasion would have not been complete without the presence of the people responsible for the creation of the museum. They are the longtime believers, admirers, and supporters of the late Justice Palma— her family, relatives, friends, and colleagues—some of them formed part of the Foundation’s Board of Trustees: Chairperson Dr. Mina Gabor, Vice-Chairperson Florangel Braid, Treasurer Corazon Alma De Leon, and members: Pearl Cardema, Tadeo Palma, Dr. Carmencita Reodica, Atty. Teresita Sison, Grace Tiongco, and Executive Director Emily Palma. Also, the TAO, Inc. through the leadership of Marian Pastor-Roces, deserves credits for the curatorship of the museum.

The day’s highlight started when Dr. Florangel Braid, Board of Trustees Vice-Chairperson and 1986 Constitutional Commissioner, introduced the Guest of Honor and Speaker. In her introduction, Dr. Braid said, “I am very honored to introduce a woman who’d exemplify many of the values and principles of the woman we honor today, the late Justice Cecilia Muñoz Palma.” …Ombudsman Carpio-Morales holds the distinction of being the first woman magistrate to administer the oath of office of a Philippine President.”

The Ombudsman honors the late Justice. As Ombudsman Carpio-Morales took over the stage and began her speech, the atmosphere at the grounds of the Department of Justice building, became so quiet as everyone’s eyes and ears focused on the Ombudsman.

In her message, she lauded the late Justice Palma as “one remarkable woman whose legacy and posterity has left an indelible mark on the life of this nation (Philippines)”. She continued, “I must confess that the most difficult part of the task given to me is to select which of Justice Muñoz Palma’s distinguished life and equally illustrious work to highlight, because everything she did, be it in private and public sphere, measured up to the same exacting standards of excellence, uprightness, and courage.”

Ombudsman Carpio-Morales highlighted two aspects of Justice Palma’s life, “As justice of the Supreme Court and as President of the 1986 Constitutional Commission. Her contributions to history in these two capacities, immortalized in the pages of the Decisions of the Supreme Court and in the Records of the Concom (Constitutional Commission), are living testaments to this extra-ordinary woman’s commitment to the rule of law, social justice, peace, democracy, and respect for human rights.”

Ombudsman Carpio-Morales ended her message with a quote from Justice Palma’s speech during International Law Day, “We shall be judged by history, not by what we want to do and can’t, but by what we ought to do and don’t.”

After her speech, Dr. Mina Gabor and Emily Palma presented to Ombudsman Carpio-Morales, a Souvenir Frame of Justice Palma’s commemorative stamp and first day cover issued by the Philippine Postal Corporation in honor of Justice Palma as the First 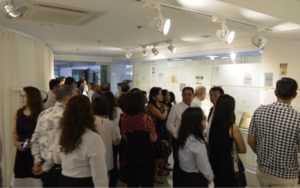 Ombudsman Carpio-Morales together with the Board of Trustees, Government officials, and Curator Marian Pastor-Roces proceeded to the Ribbon-Cutting which signaled the official opening of the museum. The other guests followed to have their first look inside the museum.

Visit us at the Mezzanine Floor, Justice Cecilia Muñoz Palma Hall, Department of Justice Building, Quezon City Government Compound, Quezon City. For more information, you may also call our office landline at (02) 264-2528 or email us at justicepalmafoundation@gmail.com.

Opening of the Justice Palma Museum: A beacon of light inside the QC Hall Compound