The first Kids and Teens Court Awareness Program (KTCAP) in Quezon City was held at the Justice Palma Foundation Office last April 27, 2016. There were a total of 20 attendees from the different organizations: 14 children and 6 accompanying adults. Jenny Cueva from CPTCSA facilitated the morning session and a court social worker of RTC Branch 107 supervised the exposure trip in the afternoon.

The morning session started at 9 AM with a prayer then the children were partnered to creatively introduce their selves. Afterwards, they had an activity and were asked to draw faces that reflect their feelings when they are inside or about to go to the court. Soon after, they were given a workbook and was used to discuss who are the people in the court room, what happens inside and after a court hearing. The morning session ended with a lunch break.

Later that afternoon, the children together with their house parents went to the Hall of Justice, Regional Trial Court (RTC) Branch 107 and were given more information about the court.  Before the afternoon session, Ms. Jenny conducted a relaxation activity to appease and prepare the children before going to RTC Branch 107. At the court,  children were asked to sit at the witness stand to do a role-play of an actual hearing.  (Note: The children were not queried about their real cases). At first, everyone hesitated, but at the latter part the atmosphere became cheery because they are only making made-up scenarios. When asked about on what they will feel in the event of their actual hearing, they responded that as they are now well-informed on what they are going to do and familiar with the people in the court room they will less likely to feel anxious and cry.

This project is in partnership with the Center for the Prevention and Treatment of Child Sexual Abuse (CPTCSA) and Action Against Violence and Exploitation (ACTVE). 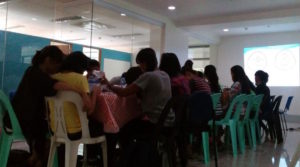 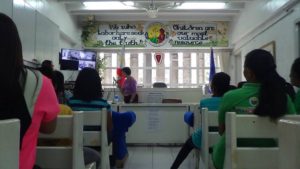